By: Matt Newton and Ryan Barnett

In 2017, the University of Central Florida football team had an undefeated season, won the American Athletic Conference Championship, and made a New Year’s Six Bowl, but this was not unprecedented. What put the world on notice was what followed these accomplishments: a win over SEC Championship game runner-up Auburn in the Peach Bowl; then potentially another undefeated season this year despite a head coaching change, and a bold claim to the 2018 national championship on the basis of the transitive property: Auburn beat Alabama in the Iron Bowl, then Alabama went on to win the National Championship, and UCF beat Auburn. Alabama, on the other hand, has made the College Football Playoff (CFP) every year in a variety of fashions which include undefeated seasons but also one-loss seasons including last year when they made the CFP without even winning their division of the SEC. If UCF clearly proved that they were capable of beating teams in the league of Alabama, a perennial playoff participant, then how does winning every game not give them a quality shot at consideration for the playoff?

All the College Football Playoff has done is expanded the debate and controversy of determining the two best teams from the former BCS format to attempt to determine the four best teams.  It has all the same problems, but now even more programs can lay claim for their teams to be given a chance to win the National Championship. For every team, the regular season has become a fourteen-week audition before the College Football Playoff Committee, who have been commissioned to analyze the teams based on the following criteria, per the College Football Playoff website: “conference championships won, strength of schedule, head-to-head competition, comparative outcomes of common opponents, and other relevant factors such as key injuries that may have affected a team’s performance during the season.” That being said, these criteria only become relevant “when circumstances at the margin indicate that teams are comparable.”

With this decision process in mind, we now begin our objective of this article: determining the ideal schedule for a college football team to make the College Football Playoff.

Obviously, the ideal season for any playoff contender would be to run the table, winning every game against any level of competition, and claiming a conference championship along the way, leaving no doubt in the committee’s mind and no nervous anticipation come selection day. However, for our purposes, we will be assuming that the given team needs to make an argument to the CFP Committee for inclusion. The goal of this article is to manage the only aspect of the CFP résumé teams have any control over before even a snap of football is played on the season: the schedule.

Schedules of Previous Playoff Teams: Models for Making the CFP

We want to analyze how having wins over certain teams impacts your team’s likelihood of making the CFP. We split these wins into 3 categories: wins over teams with regular season records of at least .500, wins over teams ranked in the CFP’s final Top 25 rankings (since those are the rankings that carry the most weight for the committee’s decision on selection day), and non-conference wins over Power 5 conference (ACC, Big 10, Big 12, Pac-12, SEC) opponents. There is not much a program can do to bolster their résumé if the teams within their own conference are performing poorly that year (2018: Pac-12), but we just want to show how having those games against tougher opponents makes a difference. The part of the process that teams actually have the most control over in scheduling is the non-conference schedule, where playing Power 5 teams is essential.

We will use the 16 teams that have made the CFP in its first four years as data, which is a fairly small sample size but it represents all of the data we currently have on the CFP. Using the records of those teams, we have the following results. CFP teams average over 7 wins against opponents with +.500 regular season records and 2.5 wins against teams ranked in the final CFP Top 25 rankings. Most importantly, only one of the 16 teams to make the CFP has done so without winning a non-conference game against a Power 5 opponent in the regular season. It is worth noting that that one team was Ohio State, who did not have such a win due to its only loss of the season coming at Virginia Tech early in the year, but finished 12-1 with a Strength of Schedule (SOS) rank of 6. Ohio State went on to win the inaugural CFP as the 4th seed. 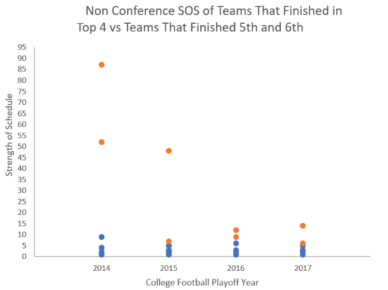 Above: The graph shows the non-conference strength of schedule rank for teams who finished No. 1-6 in the final CFP Top 25 poll for each of the 4 CFP seasons. The teams that qualify for the College Football Playoff (1-4, shown in blue) average a ranking of 3.125 in non-conference strength of schedule. The teams that finish No. 5 and No. 6 (shown in orange) in the final CFP rankings (essentially the runners-up for the CFP) average a ranking of 29.375.

According to ESPN’s Strength of Record metric, 15 of the 16 teams that have made the Playoff have been ranked in the top 4 in Strength of Record at the conclusion of the season. This is not a coincidence. The teams recognized as the best by the committee are the teams that schedule games against other good teams and win those games. Strength of schedule could be the deciding factor in the scenario in which the committee has to choose between one-loss Big 10 Champion Ohio State (No. 10 SOS, per TeamRankings) or one-loss Big 12 Champion Oklahoma (No. 15 SOS) and a one-loss Alabama (No. 5 SOS) team should they lose to Georgia in the SEC Championship game. Being a one-loss team with no conference championship was enough for the Tide last year, but would it be so again?

As the College Football Playoff has reached its fifth year, there has been no team as successful as the University of Alabama. Alabama has been to the playoff every year and has won 5 of the 7 games (.714 win percentage) they have played in the playoff. One key to Alabama’s success of getting into the playoff is their schedule. First, we took a look at the conferences games Alabama scheduled each year. All of the teams in Alabama’s division of the SEC have been ranked in the AP Top 25 at some point in the last four seasons. In the 5 years of the playoff, 24 of the 40 (60%) conference teams Alabama played were ranked in the Top 25 at the time. Alabama plays just 2 games on the other side of the conference, but with the success of the SEC, any of the two teams that Alabama chooses usually help their strength of schedule. 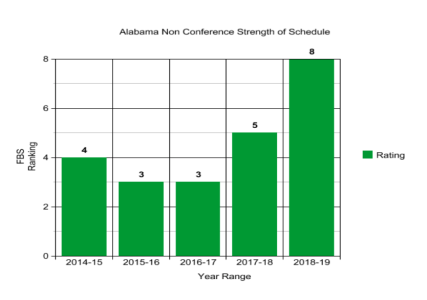 Looking at Alabama’s schedule as a whole, over the last 4 years, the keys to being in the playoff all four years have been a strong conference schedule and a non-conference schedule with a balance of lower level teams and beatable Power 5 teams. Alabama has been able to take very little risk in its non-conference scheduling due to the strength of the SEC. It is proven in the graph below, that Alabama does their homework when it comes to making their schedule while taking into account the preseason rankings. 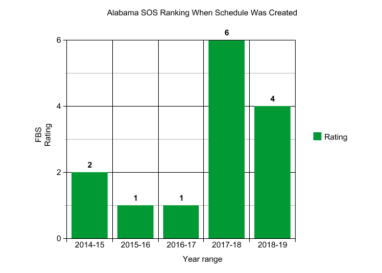 The team out of Tuscaloosa has only once been outside the top 5 in strength of schedule when the season began in the last 5 seasons. As the only team to make the college football playoff every year, the Alabama Crimson Tide have proven to be an archetype for creating the perfect schedule.

UCF has extended their win streak to 23 games, and they are demanding the committee’s attention. But the committee still isn’t listening, ranking UCF 8th in the latest CFP rankings. Why is this? Strength of schedule. UCF ranks 56th in non-conference SOS and 72nd in overall SOS. Beating every team on your schedule will not make a difference if the indicator that you can do the same against the likes of Alabama, Clemson, and Notre Dame is a win that occurred in last year’s postseason. That marquee win needs to be on this season’s résumé. In order for that to happen, the big games against great opponents need to be scheduled in non-conference play. This goes for UCF and any team in any conference with aspirations of making College Football’s final four: If your team’s conference schedule lacks quality opponents, then the best way to make your schedule “CFP worthy” is to schedule non-conference games against quality but attainable opponents. The ideal schedule for teams lacking strong conference opponents contains non-conference games against opponents that have a reputation for being successful. For teams with many quality conference opponents, then the non conference schedule does not have to be as difficult, and should contain a balance of FCS or Group of 5 opponents, and lower and mid-tier Power 5 teams.

In the Week 14 CFP rankings, UCF was ranked at 8th, which means the committee not only saw 4 teams with at least 1 loss making the playoff before the Knights, but they also see history being made with a 2-loss team (No. 7 Michigan) making the College Football Playoff before an undefeated team that lacks the strength of schedule. Unfortunately for UCF, as CFP Executive Director Bill Hancock put it: “It all comes down to who you play.”