On December 6th, 2016, the Boston Red Sox traded Yoan Moncada, the number three overall MLB prospect, as well as a package of other prospects to the Chicago White Sox for Chris Sale.[1]The very next day, the Washington Nationals traded for Adam Eaton, giving up a bundle that included the number five overall prospect, Lucas Giolito.[2]In each of these trades, a player with seemingly endless potential, a player highly regarded by the Baseball America prospect rankings, changed hands. Thus, the first thing that comes to mind is why? Was the return great enough? Was there internal conflict? Did the trade fill a hole in the depth chart? These blockbuster moves merit an analysis of their underlying motivations through which we can hopefully answer some key questions, the most important of which being why is it that a team would trade a player regarded by many to be the future of their franchise?

Perhaps the most likely explanation is that the rankings are wrong: that teams have insider information on their own players and understand that they really aren’t as good as they seem to be. And furthermore, that trading a top prospect serves as a caution signal to other team to be wary of this player. It casts doubts upon the player’s future ability to be productive. To test this hypothesis, I compiled a list of the top fifteen prospects every year between 1998 and 2014, averaged their WARs over their first six productive years (which usually constitute the pre-free agency years and thus determine a player’s value on the open market), and came out with the average and median WARs for each of the top fifteen spots on the Baseball America top one hundred prospect lists between 1998 and 2014. The data was taken starting from the first significant year, defined as one with at least 100 games played as a position player or 100 innings pitched as a starting pitcher, or less as a relief pitcher. Some exceptions were made in order to include seemingly significant years or to leave out insignificant ones. This data can be seen below, with the black squares representing players with no MLB experience:

Another measurement I considered was the average career length of each top-fifteen prospect between 1998 and 2014, by counting and averaging the number of productive years in the MLB and extrapolating the average career length for each of the top fifteen spots on the Baseball America top one hundred prospect list. A significant year was defined as one with at least 145 plate appearances for a position player, at least 60 innings pitched for a starting pitcher, or at least 30 innings pitched as a relief pitcher. This data is inserted below:

Thus, these graphs provide a baseline to compare the careers of top prospects who have been traded with the careers of those who have not and produce an informed and fact-based analysis about why top prospects are traded—whether they have less productive careers than other highly touted prospects. And perhaps this analysis may even allow us to predict the career trajectory of players like Moncada and Giolito. 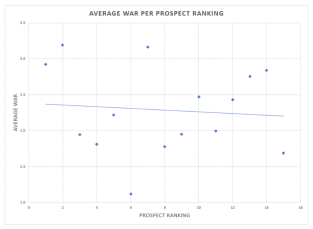 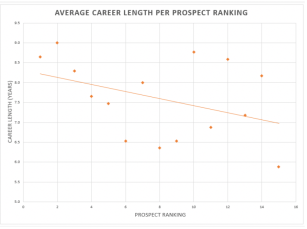 As such, we can view these top prospects who have been traded as those who do not fit into these molds—their rankings are not indicative of their actual ability, and thus their teams seek to trade them while they still have value.

Over the given time period, a total of 14 players have been traded in years where they were ranked as top-fifteen prospects. Included among them are some big names, and, as expected, some not so big names. When their 6-year WAR is measured against the average WAR for their prospect ranking, the results are largely disappointing. In fact, only four of them—Hanley Ramírez, Cameron Maybin, Trevor Bauer, and Carlos Peña—have a 6-year WAR greater than or equal to the established average (with Peña’s tying the average and Maybin’s sitting just barely above). That means about 70% of these traded top 15 prospects have had below average careers when compared with similarly ranked players. As such, it would make strategic sense that these players were traded; the numbers say they weren’t as good as their ranking, and their teams recognized that before the rest of the league did. Number three prospect Delmon Young (a 6-year WAR of -0.4) was traded in a seven-player deal for Jason Bartlett and Matt Garza;[3]number nine prospect Andy Marte (a 6-year WAR of -0.3) was traded twice in the 2005-2006 offseason, once for shortstop Édgar Rentería and again as part of seven-player deal;[4]number three prospect Jesus Montero (a 6-year WAR of -0.1) was traded in a four-player deal for Michael Pineda.[5]And none of these guys lived up to the hype.

However, there are a few things that are worthy of noting, and which perhaps give teams trading for top prospects a bit of hope. Of course, one of which is the existence of success stories (take Hanley Ramírez for example who’s 4.9 6-year WAR is way above the 2.5 average WAR of other number 10 prospects). Another is how some guys who in this model have disappointed thus far, such as Addison Russell and Wil Myers, are still in the prime of their careers, and therefore may still have greatness ahead of them.

But perhaps the greatest challenge to my hypothesis, is the significant and above-average longevity that characterizes these players’ careers. Delmon Young played 9 years with a significant sample size—above the 8.3 years of an average number 3 prospect. A number 13 prospect in 2010 when he was traded, Justin Smoak played 9 significant years—well above the 7.2 years of an average number 13 prospect—and is still active. In fact, 7 of the 14 players traded as top fifteen prospects have played more significant years than the average prospect of their ranking, and 5 of the 7 below average are still active and will probably play a few more years. Thus, while it seems that traded prospects fizzle out, they do play about as long, if not longer, than non-traded prospects. This implies that while perhaps traded top prospects may not turn out to be stars, they are still about as likely to have decent, long-lasting careers in the MLB.

Now returning to Moncada and Giolito, I would bet against them playing as well as an average prospect of their respective rankings. Statistics and data modeling show that it’s simply more likely that these guys are not as good as everyone says they are, and this idea may very well have landed them on the trading block. But there is enough doubt, enough counterexamples, and enough other possible motivations that these guys may turn out to be stars. The only thing is, however, that history seems to be against them. And taking this into consideration, GMs should be increasingly wary of trading for top prospects: these players are more likely to be busts than superstars.